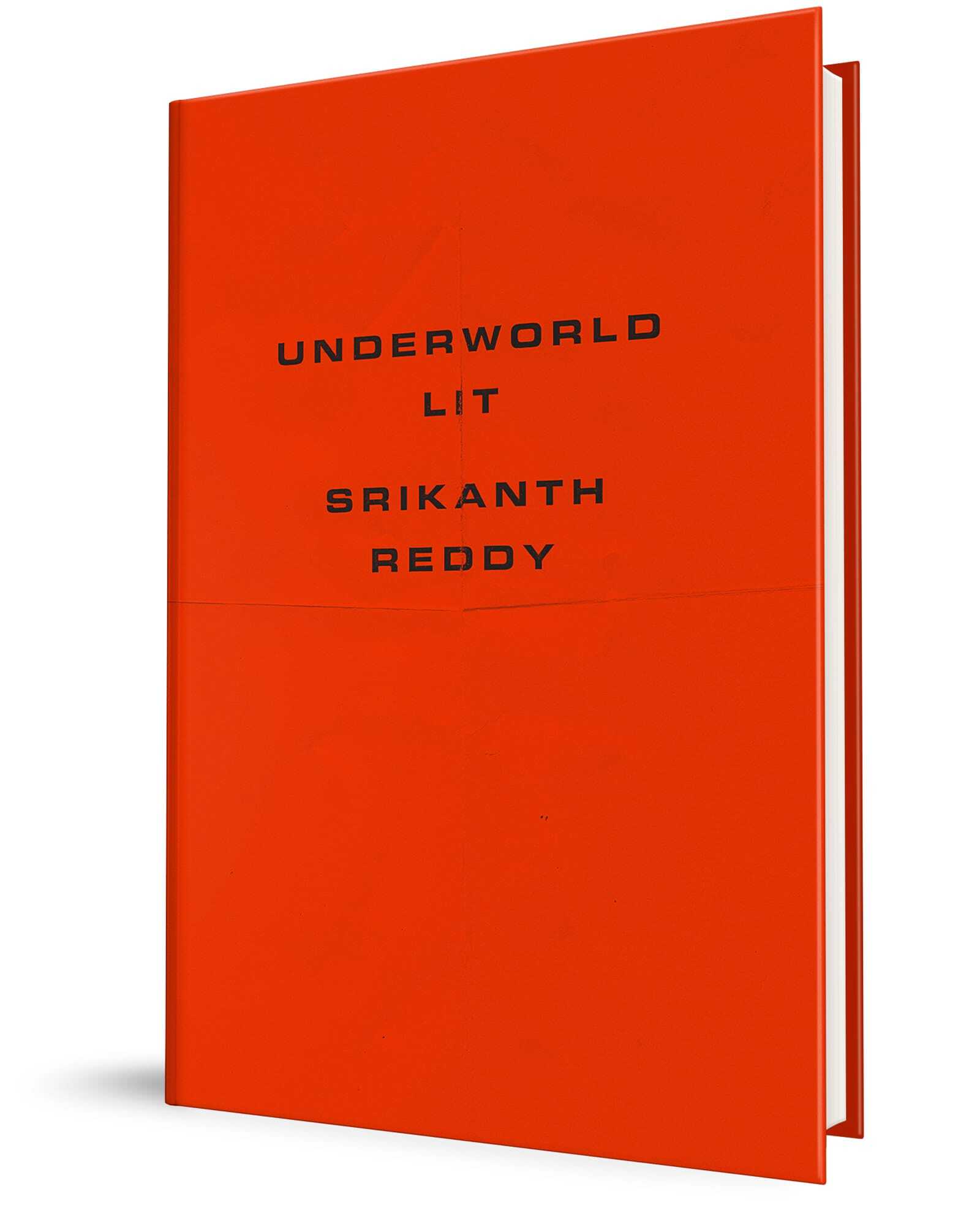 "How to describe Reddy's strange and remarkable third collection? An academic's nightmare? A hilarious exercise in invented autobiography? A guided tour of hell?...It's a harrowing, Dantesque journey, a class that, perhaps, should be required for all; thankfully Reddy has provided all the necessary materials for us to take it from home."
--Craig Morgan Teicher, in NPR

The Hong Kong Review of Books

"Underworld Lit is a book-length poem with a more than passing resemblance to the campus novel, and it may well rank as one of the masterpieces…"
-- Review by Paul Scott Stansfield

"Reddy would ask us, what is it that we think we know? In this way, Underworld Lit should be of particular interest to readers with investments in humanities education. Reddy’s painfully accurate send-up of university management speaks to the competing objectives of monetizing learning and an ethical approach to knowledge. But the critique is not limited to the present. Underworld Lit reckons with our historical inheritance and complicity in systematized violence."
-- Review by Rachel Carroll

“Reddy makes devastating, heavyweight lines of poetry sound so casual and throwaway, and it’s this deceptively light touch, this ability to cope with the horror of our condition through laughter, which makes this highly original book so essential.”
– Review by Vik Shirley

"What happens after the end that is not the end, in the moment of a return to normalcy that you did not expect to make? In this sardonic (until it’s tender), funny (until it’s sad), and surreal (yet strikingly real) prose poetry collection/fantasy tale/auto-eulogy, such questions are asked again and again, corkscrewing around the same points at different altitudes. Deeply personal confession gives way to ironized academia, which in turn gives way to dreamscape narrative, accumulating course planning materials, texts, translations, and myths."
-- Review by Tim DeMay

"Reddy analyzes the still-contemporary ambition to live everywhere forever, as the modernists did… In Hades, or Malraux’s Imaginary Museum, poets wait to be revived, or even just robbed. All styles and subjects wait on a shelf down there for an explorer to take up again. Reddy’s orphic provocation, addressed to contemporaries, is to return to the depths."
-- Review by Robert Von Hallberg

"A realm that spans prose and poetry, asking for pause amid the momentum of plot to consider national devastation and nuclear family; pathos and tweeness and grimness; things loved, lost, or bought; language borrowed, revived, translated."
-- Review by Calista McRae

"Reading Underworld Lit, even the title’s meaning shifts, from the slang version of a course title to “lit” as the past tense of the verb “to light.” Yet that shifting ground is the very foundation of this book, where slippage moves the reader and the unsteady becomes graceful insight…with wit and sorrow, Reddy exposes the demands of the corporate university and the demands of the soul, the play of teaching and the play of children, the thrilling effort of sense-making and the futility of mastery in a complex and confusing world."
-- Review by Leah Souffrant

"An exciting, captivating read . . . a collection heavily steeped in philology, historical cultural criticism, moral philosophy, and death. But mix in a talking, portable airplane gateway and an underslept toddler who doubles as an infernal judge, and the narrative is balanced between the terrifyingly gravid and the darkly humorous absurd. Though in the end, what makes the book so compelling is Reddy’s insistence on intimacy. And complicity."
-- Review by Michele Battiste 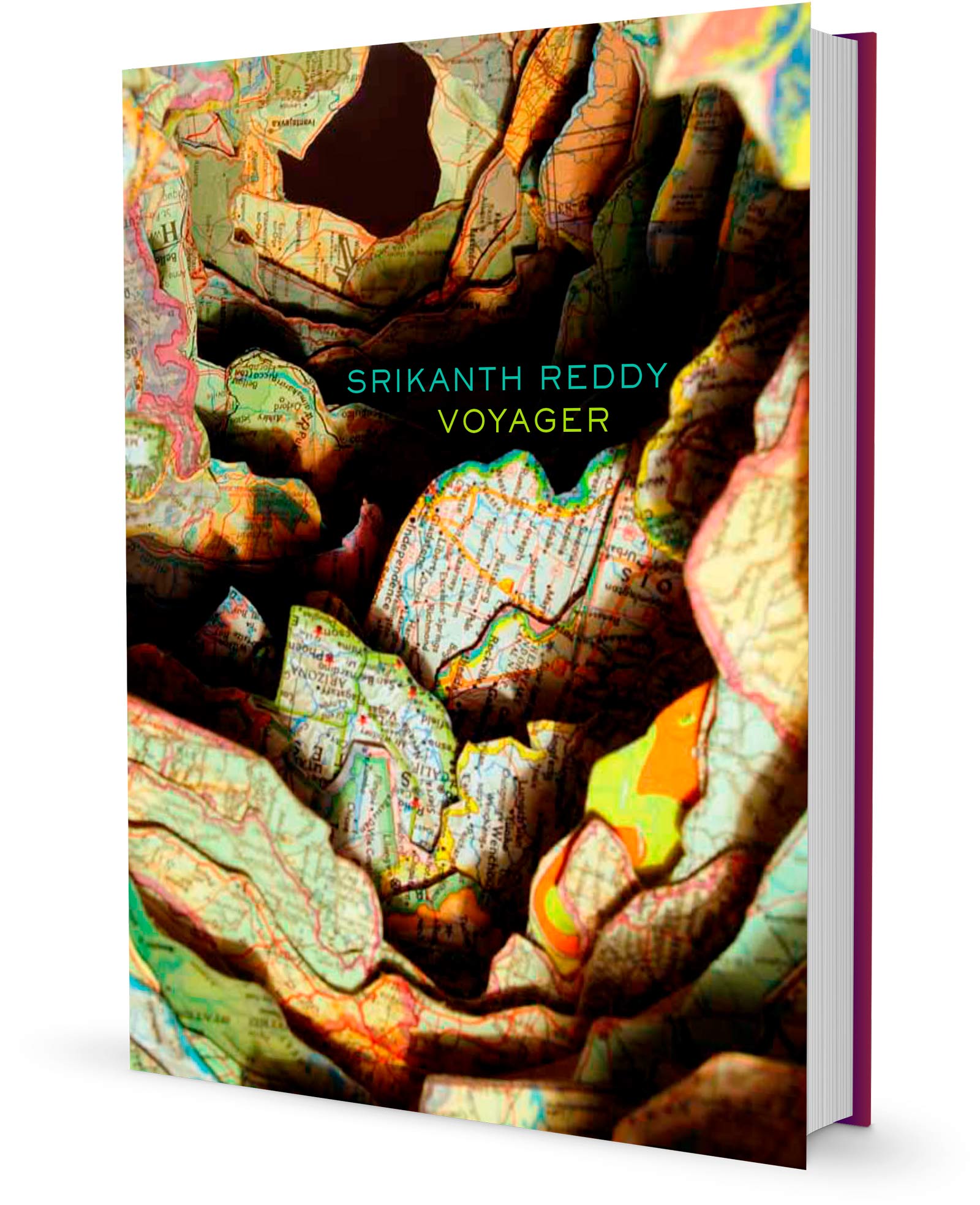 "Srikanth Reddy's Voyager unwinds at a hypnotic pace, as inexorable as a set of philosophic propositions, yet also strangely porous, like poetry. Gradually we come to understand words spoken by Escher in the poem, 'formal objectivity / might be / a personal matter,' but by then it's too late: we're hooked. It's is a work unlike any other, deeply moving, disturbing, and ultimately fulfilling."

'Voice and Erasure in Srikanth Reddy's Voyager,' by Langdon Hammer in The Fate of Difficulty in the Poetry of Our Time

'The Poetics of Erasure,' by Tiana Nobile in The Writer's Chronicle

‘Politics, Erasure, and a ‘sometimes genuine music,' by Andrew David King in The Kenyon Review

“Reddy is so gifted that the poems, despite their weighty origins, soar.”
– Review by Dan Chiasson

“The book itself is mesmerizing, and Reddy's lines are crisp and often eerily lovely.”
– Review by David Orr

“Voyager is an indication of what is possible in the form. For its remarkable innovation, panoramic lyricism, and utter empathy, it may well endure.”
– Review by Broc Rossell

“Reddy’s operation concerns itself with making an already existing book—Waldheim’s memoir—into three books, and preoccupies itself with the impossible: making a new text where no words can offer any assistance or aid.”
– Review by John Rufo

“Blind where he would be most virtuous, culpable in his evasions of power, Reddy’s Waldheim is one of the most memorable and disturbingly recognizable characters to emerge in recent poetry.”
– Review by Joshua Corey

“Through Reddy’s ‘erasures’ and the negative capabilities of his excavated text we feel, even if we cannot see, what’s missing, what’s gone—into outer space, into self-denial, into the ironies of history and of the role between the wielders of pens and of swords. We find ourselves—culpable, impressionable, alive—in the human space he has created.”
– Review by Lisa Russ Spaar

“An impressively dexterous poet, Reddy subscribes to no one school or art, and his talents are interdisciplinary and vast. Inquiry coaxes his poems into their necessary existence, and he rightly recognizes that the routes of any inquiry demand the use of all one’s resources.”
– Review by Jennifer Chang

Notes on Composition:
A Note on Process
From Book 1
From Book 2
From Book 3 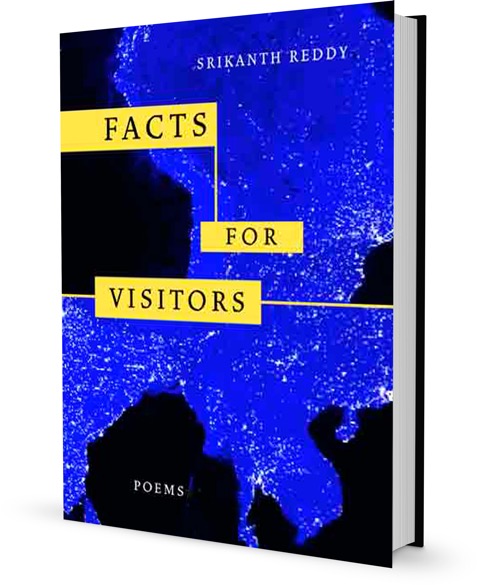 "In this altogether brilliant collection, the various but carefully sequenced (and deeply consequential) poems unfold in a world undergoing eclipse. It is a transient, unsettling, and fascinating phenomenon, the casting of shadows by shadows (of experience, literature, language, the natural sun) traveling across the totality of the known world: here. The process does not produce negation. It is, on the contrary, an odd plus. And the darkness is never complete; it is surprised into perceptibility by sources of counter-illumination, among them wit, intelligence, and, above all (as underlying all), love."—Lyn Hejinian

"The present is a word for only those words which I am now saying" writes Reddy in this profoundly moving first collection. And, indeed, a search for the nature of the 'present' continuously animates this stunning, anguished yet level-headed attempt to reconstruct a history of our kind as if from some as-yet unknown vantage point. Striving for a complex objectivity, the book explodes prior notions of orientation—geographic, historical, cultural—and recovers from the debris a profoundly trustworthy reorientation, political as well as emotional. Reddy speaks to us fully self-conscious and, strangely, fully innocent. It is a mesmerizing voice."—Jorie Graham

“In his first volume of poetry, Facts for Visitors, Srikanth Reddy accomplishes a goal that is usually only achieved by much older writers working at the peak of their powers: he evokes a world that seems full and coherent in its scope—a world that is at once the world we recognize and one that, because fully and truly inhabited by his imagination, is also completely the author’s own.”
– Review by Matthew Miller

"There are gardens and courtyards, oceans, crows, coins, boots; the poems are peopled by a bizarre hierarchy—serfs and houseboys, footsoldiers and rag-pickers, a servant, a king, a viceroy, a governor's wife. Here there be monsters--"Centaur" and "Gryphon"--and dusty words: aqueduct, amulet, harlequin, welkin."
– Review by Maggie Dietz

"He gives us allegory as his educational inheritance, but it's allegory without lesson. He gives us sorrow—but it is not so much the sorrow of observation so much as implication. He is this world of which he writes, and a resident of it."
– Review by Daniel Beachy-Quick

"Here are poems that explore and transform traditional and experimental forms, discover over and over what a line is, and seek out all sorts of registers. Here are instruction manuals, declarations, spare and startling images, and aphoristic epiphanies."
– Review by Gibson Fay-LeBlanc in Pleiades 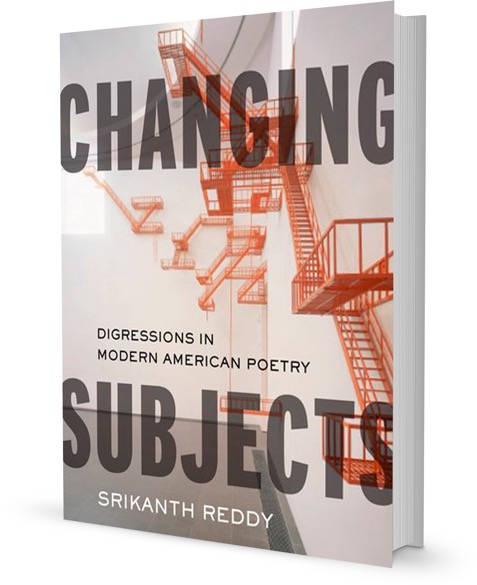 "True poetry goes where it will, and rarely by the shortest available path: Reddy's remarkable study shows how modern and contemporary poets make way for digression, and how their digressions work against familiar categories and hierarchies, reorganizing--as well as disarranging--our senses of reality en route. Marianne Moore's new model of education, Lyn Hejinian's disordered anti-plots, Frank O'Hara's casual conversations, and John Ashbery's figures for drifts and flows all lead, in Reddy's vivid arguments, not only into one another but into a high tide of twenty-first century work. This first book of criticism from a significant poet can both instruct and delight: it might even change a number of critical minds." --Stephen Burt, author of Close Calls with Nonsense

“Dazzling, erudite, and original, Changing Subjects provides us with a powerful new way of understanding the work of Wallace Stevens and twentieth-century American poetry as a whole.”
– Review by Andrew Epstein

"Reddy's account is a rich one because of how he engages digressiveness as a means of exposition within this study. Reddy recounts multiple eighteenth-century texts with much specificity in order to ferret out their Enlightenment logics and the disruption of these. His overall query into how modern poets challenge Enlightenment knowledge through digressive modes provides much insight into knowledge formation itself."
– Review by Jeanne Heuving